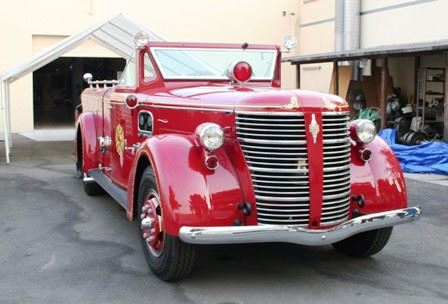 The Taylor Fire Department dates back to 1939, when the community was a township. In the beginning, the Department consisted entirely of volunteers under the leadership of Fire Chief Edward Probst. The volunteers were community members who responded when they could by using personal vehicles. When a call came in, the City of Dearborn would respond with a fire truck and one firefighter. The volunteers from Taylor would respond to assist the Dearborn firefighter in extinguishing fires.

This system stood in place until 1941 when Taylor Township purchased its first fire engine, a 1941 american LaFrance (an example of which is pictured at right), and hired four full-time firefighters. These four firefighters worked 24-hour shifts, every other day, for several years. When the alarm sounded, the full-timers and the engine would respond. Despite a roster of only four full-time firefighters, the department responded to a great number of fires. In 1946, there were 48 house fires, 10 building fires, seven garage fires, 14 car fires, 35 grass fires, three chicken coop fires, two outside trash fires and a multitude of fires that were reported too late for the department to respond.

It appears that fires came in groups, as they do today. At times, the department would be idle for up to three weeks between calls. However there were some very busy days as well. For example, on March 21, 1949, the firemen responded to 23 separate grass fires in less than 12 hours.

Although the firefighters were not conventional Emergency Medical Technicians (EMTs) or paramedics, as we know today, they did respond to "resuscitator" calls, providing simple first-aid and oxygen to injured and ill people. The call for the "resuscitator" was rare at the time, with fire being the primary concern of the department. When Taylor firefighters did respond to a "resuscitator" call, they usually had a private ambulance backup. In other instances, they would speak with the patient’s private doctor for on-scene medical direction and then waited there until the doctor arrived. In a 1948 incident, the firefighters provided treatment to an infant in cardiac arrest for two hours at the scene; they finally stopped their efforts based on the orders of the patient’s doctor. On occasion, the fire department as well as the Wayne County Sheriff’s Office would transport victims as needed. There were no protocols or treatment standards at that time and EMS training was not as formal as it is today.

In 1956 the Taylor Township Firefighters became an official International Association of Firefighters (IAFF) local. Taylor became a chartered city in 1969. A considerable amount of things have changed over time, yet one thing has remained constant: The devotion and bravery of the men and women known as the Taylor Professional Firefighters.