The most recent decades of Taylor’s history have been characterized by development and improvement. No longer agricultural, the community boasts comfortable neighborhoods, great schools, a variety of shopping opportunities and several industrial parks. In fact, Taylor experienced a residential and commercial building boom of sorts in the 1980s. Residents could live, work and shop, all within a convenient 24 square miles.

Mayor Cameron Priebe is generally credited with the City’s modernization and served two terms, spanning 20 years. He first served as mayor from 1981 to 1997 during the city’s period of great growth, before returning for another four-year term beginning in 2005. Cameron G. Priebe Plaza, which is the courtyard east of City Hall and directly in front of the Police Station, is named for the former Mayor. 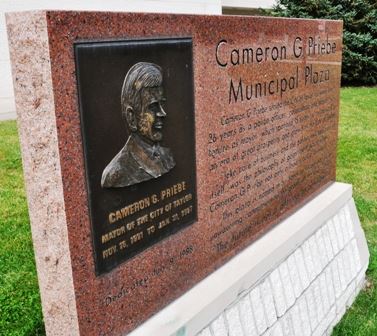 In 1996, President Bill Clinton visited the City to dedicate the Public Works building and the renovated City Hall - a historic day for Taylor. In 1998, Andrew Cuomo, the Secretary of the U.S. Department of Housing and Urban Development, became the latest dignitary to visit the community. He praised the City’s plan to redevelop the Southwest section of the community, calling the Villages of Taylor "a model for the nation."

In August 2004, the City of Taylor welcomed both candidates for President of the United States, President George W Bush and U.S. Senator John Kerry. Both appeared in Heritage Park, the city’s regional park. In 2006, former President Bill Clinton returned to Taylor, this time to campaign for candidates for office from the Democratic Party. President Barack Obama stopped here during a campaign tour prior to his 2008 election.

In 2001, the city welcomed the grand opening of the Taylor Sportsplex, the finest municipal recreation complex in the region, and the beautifully renovated William Ford Senior Activity Center, which serves Taylor’s active senior population.

Improvements to the City of Taylor

Another major improvement was the reconstruction of Telegraph Road (US-24), which will serve residents and business people well into the 21st Century. The creation of Midtown Taylor was approved by Taylor voters in 2001, creating another residential and shopping district during the years to come. In 2004, the city embarked on further municipal complex expansion, creating a new courthouse and fire station.