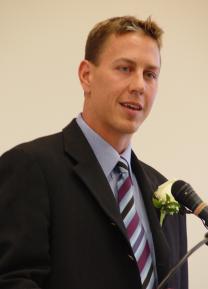 Steve Avery is considered the best-known baseball player in Taylor history. At age 16, he helped lead the Taylor American Legion baseball team to the state championship and won the Kiki Cuyler Award as the most valuable player. As a prep All-America and Michigan’s Mr. Baseball, Avery led John F. Kennedy High School to the state baseball finals in 1988. He holds many season and career records at JFK in both pitching and hitting. In fact, the baseball and softball fields at the high school are named after Avery. He also was a prep standout in basketball and cross country. A first-round draft choice right out of high school, the left-hander pitched 11 seasons in the Major Leagues.

In the early 1990s, he was part of an Atlanta Braves’ staff that was the best in baseball. He earned 18 victories twice with the Braves, was named the most valuable player of the National League Championship Series (NLCS) in 1991 and pitched in the Major League All-Star game in 1993. In 1991 and 1992, he set a Major League by pitching 23 consecutive scoreless innings in NLCS. In all, he played for four teams (including Boston, Cincinnati and Detroit) and pitched in four World Series. In 1999, he underwent season-ending surgery to repair a torn labrum below the rotator cuff. But four seasons later, in 2003, he came back to pitch for the Tigers, going 2 to 0 to improve his career record to 96 to 83. Avery is the son of Taylor Sports Hall of Fame member Kenneth Avery, who also pitched in the Tigers system.