A celebrated soldier from America’s past discovered a memorial devoted to others just like him when 92-year-old Calvin Shepherd of Inkster visited the Taylor Veterans Museum on December 30.

Former City of Taylor employee Georgine Dumas, a family friend of Shepherd’s, along with former City Councilman Butch Ramik, helped the World War II veteran of the Montford Point Marines connect with the City’s veterans museum. City Councilman Tim Woolley, the council’s liaison to the Taylor Veterans Museum Commission and a veteran himself, hosted Shepherd’s tour of the facility along with Mayor Rick Sollars and Commission President Jack Myers.

It was really special to have him tour our museum, Woolley said. He really loved it. He told me that he felt like a rock star.

History of the Montford Point Marines

Shepherd was a member of the nation’s first African-American Marines - the Montford Point Marines. They received their name from the segregated, mosquito-ridden camp in North Carolina that they trained in during the World War II era. Shepherd, along with other survivors of his division, were honored with the Congressional Gold Medal, the highest civilian award handed down by the U.S. government.

More than 19,000 men trained at Montford Point in the 1940s, but only 420 survive today. Many, like Shepherd, live in the Detroit area. Previous to the Congressional Gold Medal being bestowed upon the group, Congress awarded the same medal to the famous Tuskegee Airmen - African-American pilots who fought in WWII. That action seemed to open the door for other deserving veterans like the Montford Point Marines. The medal itself reads "Montford Point Marines 1942-49" on one side and "For Outstanding Perseverance and Courage that Inspired Social Change in the Marine Corps" on the back. Recognition of the Montford Point Marines certainly helped ease the bigotry inflicted upon African-American members of the military decades ago. However, those feelings weren’t evident during Shepherd’s visit to Taylor.

That was one thing that really stood out with him, Mayor Sollars said. He was just proud of have served his country. There wasn’t any pent up anger, despite what they had to endure back then. Those men had a job to do during a very difficult period in our country’s history, and they stepped up and did it. It was an honor to have him visit our museum.

According to Blackpast.org, initially, the Montford recruits were trained by white officers and non-commissioned officers (NCOs), but citing a desire to have blacks train blacks, the Marines quickly singled out several exceptional black recruits to serve as NCO drill instructors.

In January 1943, Edgar R. Huff became the first black NCO as a private first class. In February Gilbert "Hashmark" Johnson, a 19-year veteran of the Army and Navy became the first Drill Sergeant. By May 1943 all training at Montford Point was done by black sergeants and drill instructors, with Johnson as Chief DI. Both Johnson and Huff would be renowned throughout the entire Marine Corps for their demanding training and exceptional leadership abilities. 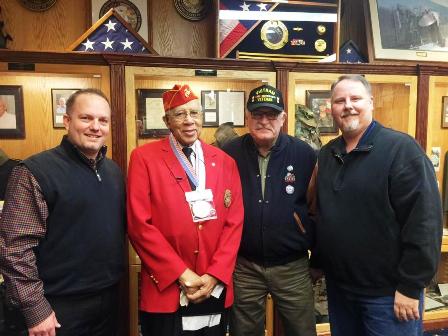 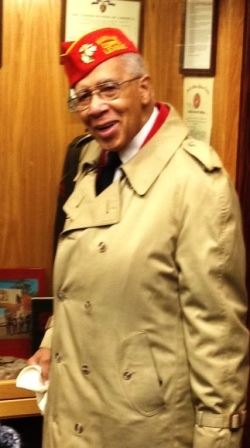 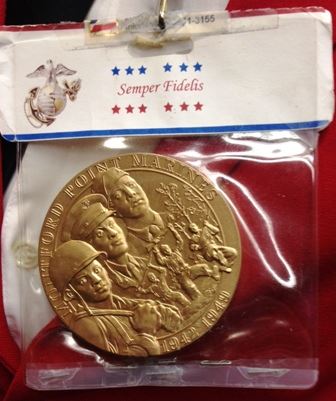 The men soon distinguished themselves as the finest artillery gunners in the Marine Corps, breaking almost every accuracy record in training. Unfortunately, discrimination towards African American fighting abilities still existed and when shipped to the Pacific, they were posted to outlying islands away from the primary action. The only Montford Marines to see action, and record casualties, were the Ammunition and Depot Companies in Saipan, Guam, and Peleliu. Private Kenneth Tibbs was the first black Marine to lose his life on June 15, 1944.