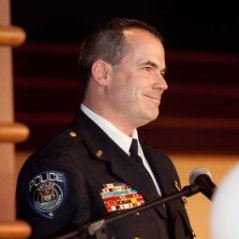 Mayor Rick Sollars kept is 2017 Inaugural Ceremony keynote speech short and sweet – but he had a surprise at the end. In front of over 200 people including a large contingent of Taylor police November 14 at the Lakes of Taylor, the mayor named John Blair the City’s newest police chief. Simultaneously, Richard "Rick" Hopper was named deputy chief.

"We did a wide, in-depth search to find a new police chief and deputy chief," Mayor Sollars said. "But as it turned out, we had the best people for the job right here in our own department. I couldn’t be happier."

The search committee spent months going through candidates for the position, some of which were from departments with as many as 3,000 employees.

He obtained an Associates Degree from Schoolcraft College, Bachelor Degree from Eastern Michigan University and is currently pursuing a Master’s Degree in Public Administration. He served for six years as a U.S. Army Military Police Officer with the 1176 M.P. Company with a 1 year deployment in support of Operation Joint Endeavor.