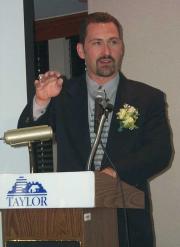 Ron Adams gained fame in football at the high school, college and pro levels. Adams, a quarterback, was nominated by a fellow Hall of Famer and his former Taylor Center High School football Coach, Ken Avery. As a prep star, Adams earned spots on the All-Downriver team and was the co-most valuable player, as selected by The Mellus newspapers.

Adams went on to start all four of his years (1984 to 1987) at quarterback at Eastern Michigan University (EMU), where he also earned a bachelor’s degree in education. He was the first quarterback to lead EMU to a Mid-American Conference championship and a victory in the California Bowl. A unanimous all-conference selection at quarterback, Adams set five team career records: total yards (5,259), passing yards (4,757), total plays (896), passing attempts (665) and completions (354). In 1999, he was inducted into the EMU Hall of Fame.

Adams went on to play football in Europe and in the Arena League for the Detroit Drive in 1992, helping the Drive win the league championship. Four years later, he played with the Downriver Raiders, which won the national championship of the United States Football Association.