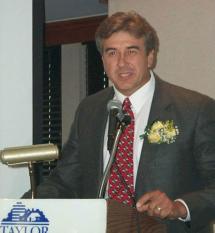 Jim Gendron, who was nominated for the Hall of Fame by his brother John, is a graduate of Harry S. Truman High School who also attended Taylor Center High School. A multi-sports performer, Gendron received many awards during his high school career, including:

Gendron went on to Wayne State University, where he received a bachelor’s degree in sociology. He earned all-conference football team recognition in the Great Lakes Intercollegiate Athletic Conference in a unanimous vote by coaches.

After college, he went on to an outstanding amateur and professional softball career, highlighted by his 1996 induction into the Michigan USSSA Hall of Fame.